LOVE NOTES FROM A DIRTY OLD DRUNK
Get ready for a kinder, gentler Bukowski
By Don Stradley 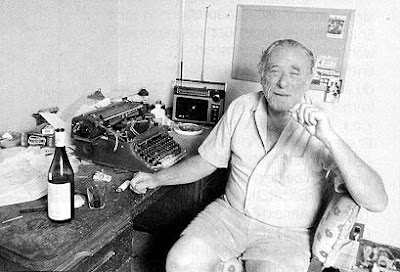 As a poet, Charles Bukowski was prolific to the point of mania, and very uneven. Reading Charles Bukowski On Love, an anthology from Ecco published a few months back to coincide with Valentine’s Day, one feels that had Bukowski not attained a reputation in Europe for his seedy subject matter, and in America for the cult movie Barfly, he’d barely rate a turn at your local poetry slam. Most of the early pieces here sound mannered, with titles like ‘I Taste The Ashes of Your Death,’ and lines like “you mean/a love I have not met/is less than a selfishness I call near?” Later, as the collection inches into Bukowski’s work of the 1970s, we get some of the more familiar tone, the shit-stained panties, “cunt hairs in the teeth,” and the like. By that time, of course, Bukowski had achieved a kind of fame and could write about farts if he wished, and he often did, and editors happily printed his work, just to have big bad Buk listed as a contributor.

With no political leanings and no particular reverence for traditional poetic form, Bukowski must’ve seemed like a relief from Viet Nam, Nixon, civil rights, women’s liberation, and student upheavals. When his work began appearing in the LA Free Press and various skin mags, even those who didn’t care for him had to admit there was no one like him. His L.A. landscape, populated by vicious whores and violent drunks, felt real, but was cartoonish enough to fit alongside the underground comics and comedy albums of the day. As X-rated material weaved into the mainstream, Bukowski imbued his poems and stories with increasing frankness and humor. Soon, this writer who counted Céline and John Fante as influences was a favored court fool of the post hippie era. Rock stars and political figures died away, but the nasty old drunk leering at the women lived on, and on. Still, there were always moments in between the laughs and vulgarity that smelled, not just of cheap wine and dirty socks, but actual poetry.

The poems collected in Bukowski On Love reflect only a fraction of his output and go nowhere towards a reassessment. The arrangement is neat - cherry picked samples from each era of Bukowski’s career pass by your eyes quickly. You'll get a few poems about his wives, his daughter, and a few about good old Jane, the woman played, more or less, by Faye Dunaway in Barfly. Hell, there’s even a love poem about his favorite Olympia typewriter, and a moving piece about a beloved harness driver whose “rhythmic crazy rocking was transferred from man to beast…” There are also a few photos of Bukowski looking teddy bearish and happy,  some of his illustrations (still bursting with primitive charm) and even a reproduction of an actual Bukowski-typed manuscript, for those, I suppose, interested in seeing his cross-outs (you’ll be amused to see that he misspelled “Los Angeles”). Yet, there’s something about Charles Bukowski On Love that makes it feel like a glorified stocking stuffer. Granted, if RCA could mine Elvis Presley’s old albums for a series of clueless rehashes and greatest hits packages, why can’t Ecco make a few more bucks off Bukowski the same way?  Ecco has already raided the Bukowski archives to put out Bukowski On Writing, and, get this, Bukowski On Cats, all edited by a chap named Abel Debritto who, according to the book’s flyleaf, “works in the digital humanities,” exactly the sort of high-blown distinction that would’ve sent Bukowski puking.

If Ecco is determined to break the man up into sections and resell him a bit at a time, we might also expect such titles as Bukowski on Drinking, Bukowski On Horses, Bukowski on Rape, and Bukowski on Death. This could go on well into the 2030s, or as long as Ecco can squeeze a buck out of Buk. Is this method so bad, really? I don’t know. What made Bukowski interesting was that he used to give it all to you at once, the entire human comedy in one fat, hairy package, rather than parcel it out one topic at a time. Perhaps it’s the neatness of Charles Bukowski on Love that irritates me, the anal quality of it all, this feeling of Bukowski scrubbed clean.

Of course, a few of the old favorites are here, including "Quiet Clean Girls in Gingham Dresses," and "One for Old Snaggletooth," and perhaps the best poem of his later years, "The Bluebird." One is still surprised when Bukowski puts aside his gruff personae and shows an unexpected gentleness, such as this litany about life’s simplest pleasures:

“I like reading the Sunday papers in bed
I like orange ribbons tied around the cat’s neck
I like sleeping against a body that I know well
I like black slips at the foot of my bed
At 2 in the afternoon.”

Still, Charles Bukowski On Love feels flimsy. To present nothing but Bukowski’s mushy side is akin to The Beatles without ‘Helter Skelter,’ or Sugar Ray Robinson fighting with only his right hand. Missing is the guy who wrote, “You boys can keep your virgins/give me hot old women in high heels/ with asses that forgot to get old.”  That’s from "One of the Hottest," a good poem not included here, for Debritto and Ecco wanted to create a quaint version of Bukowski,  ignoring the man who, despite the seismic changes going on in the country, focused solely on his own small existence among the bums and the postal workers and the horse betters, the lonely and the rotten, and wrote about whatever stuck to the windshield that day, which could be anything from his suicidal fantasies, to the strange allure of little girls, to the way ancient sorrows can well up in a man and stop him in his tracks, to the vagaries of luck, to the joys of Beethoven and Brahms, and occasionally, to the futility, and sometimes the quiet splendor, of love.