LILA LEEDS - How bad can a good girl get? 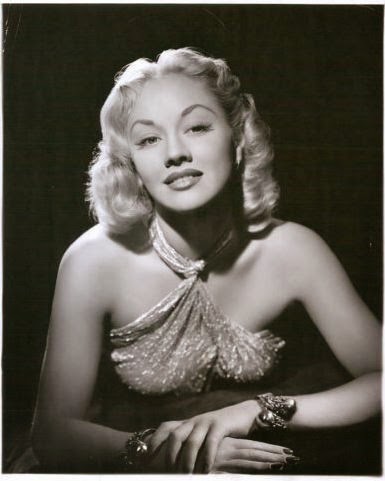 Lila Leeds always felt she had psychic powers, and on the night of Aug. 31, 1948, she sensed there was something strange in the air. That is, something other than marijuana smoke.

She and her roommate Vicki Evans were enjoying a night at their small bungalow on Laurel Canyon Hill near Hollywood. Lila was smoking a joint.  She couldn't have known, but her house was being watched by police and federal narcotics agents.

They were awaiting the arrival of Robert Mitchum. He was a 31-year-old star who had already earned a Best Supporting Actor nomination. Leeds was a 20-year-old actress who, despite her appearances in gossip columns as a sort of budding bad girl, had yet to land a leading role. She and Mitchum had been seen around town together.  Mitchum liked to smoke a little and get loose, and Leeds was a good sport. This was Hollywood, after all.

Mitchum arrived with a friend. Within a few seconds, the cops barged in and broke up the party.  There were as many as 15 joints spread out on Lila's coffee table.

In 1948, getting caught with pot was a serious offense, although  Mitchum emerged from the scandal more popular than ever.

Lila Leeds?  She was as done as a cigarette butt squashed under Mitchum's shoe.

Prior to the pot bust, the most anyone knew about Leeds (real name: Lila Lee Wilkinson) was that she'd once worked as a hatcheck girl at Ciro's, a famous Hollywood nightclub. She looked a bit like Lana Turner, an observation compounded by her romance with Turner's ex, the hunky lunky Steve Crane.

Leeds' bio had her born in Dodge City, attending high school in Clovis NM, and moving to Hollywood to try modeling and acting. Unlike most girls who arrived in Hollywood only to disappear into a series of odd jobs, Leeds was spotted in an amateur play production and signed immediately by MGM. According to legend, she didn't even sit for a screen test.

Her next break came when she was in court getting her quickie marriage to composer Jack Little annulled (she'd learned the bum was still married). Since Little was a Hollywood figure of some renown, pictures of their court hearing made the newspapers. Movie producer George Haight saw Leeds' picture and thought she'd be right to play a hot blonde secretary in a new film, The Lady in the Lake (1947). 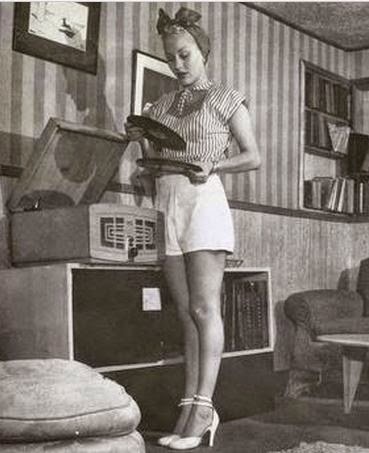 Leeds accepted the role, but it didn't exactly send her skyrocketing into stardom. She spent 1948 in bit roles, although there were regular sightings of her name in gossip columns, including an incident at the Mocambo club when Leeds shoved a young Marilyn Monroe for getting too chatty with Crane.  Leeds  also received notice for some hospital trips, once for a bad case of pneumonia, and again for an accidental overdose of sleeping pills.

Just months before the fateful night with Mitchum, Leeds was cast  in The Jungle Goddess,  a low budget quickie from Lippert Pictures that would eventually be made without her. The movie was released with model Wanda McKay ("Miss American Aviation of 1938") in the lead role, a mere two weeks before Leeds was arrested. The movie was a stinker, but nothing in comparison to what would eventually be Leeds' swansong.

She came off badly at the trial. While Mitchum smirked and shrugged his way through it, Leeds talked about her psychic powers, and how she believed her roommate had tipped the cops. Editorials were written describing Leeds as a beautiful but dumb young lady, an example of what happens when ignorant youngsters are swept up in the big bad world of moviemaking.

All that was waiting for Leeds after her sixty day sentence was an exploitation feature called Wild Weed. It was loosely promoted as her own life story, and she received top billing - a star at last!

Wild Weed seems like an effort to not only exploit Leeds' bad girl rep, but to also clean her image up a bit. She plays Anne Lester, an innocent showgirl working to put her brother through college. A slick character named Markey gets her hooked on marijuana and eventually enlists her to help him sell the stuff. (Unlike Lila, who reportedly took her first puff quite willingly while in the company of Stan Kenton's band.) When Anne's brother catches her smoking, he hangs himself. She's eventually arrested, and spends 60 days behind bars screaming like a crazy woman. This ordeal convinces her to help the authorities bust Markey.


The movie was banned in Ohio for fear it might inspire drug use, but the evils of marijuana just wasn't much of a selling point anymore. Leeds made personal appearances to promote Wild Weed, giving five minute talks before screenings to warn audiences about the dangers of the drug, but according to Hollywood columnist Edith Guynn, the movie "was laying a great big egg in L.A."  and Leeds' personal appearances weren't likely to help. Made more than a decade after wacky drug classics like Reefer Madness, Wild Weed was already behind the times.

As Wild Weed died a quick death, Leeds found herself in more trouble, including car accidents and public intoxication. Leeds was eventually charged with violating her parole and ordered by Judge Clement D. Nye to stay out of California for five years. Nye claimed Leeds was leaving the state voluntarily, but headlines blared "LEEDS BANISHED!" Five years was more than enough time for the public to forget an actress. The A.P. noted that Leeds "wept a little" as the judge criticized her.

There was then a brief marriage to bandleader Dean McCollum, and something reported as a "nervous breakdown," although it was possibly drug related. There was also a broken engagement to the son of an Illinois politician. (How many political advisers did it take to quash that one?)

Leeds finally settled in Chicago with her third husband, pianist Irving Rochlin. He wasn't exactly a good example for her, having once tried to rob a gas station to support his own drug habit.

With no more movie roles coming, Leeds tried to recreate herself as a singer, but she was soon back in a monotonous cycle of arrests and rehab.  She'd appear for court dates wearing furs and toreador pants, while Rochlin acted as her spokesman. "Just a little setback," he'd say.

In 1955 Leeds testified before a senate subcommittee that her career had been ruined by marijuana and heroin.  In 1956 Leeds hit a new low: she was arrested in Chicago for soliciting.

The ensuing years saw Leeds embroiled in custody battles for her children, who'd been in and out of orphanages while their mom was in trouble.

By the 1960s Leeds was back in LA, threatening to write a tell-all book that would incriminate a number of Hollywood big shots. It never came off. In time, she was only remembered as the girl busted along with Mitchum. Eventually, she wasn't even remembered for that.

Wild Weed had a long, but inconsistent shelf life. Exploitation distributor Kroger Babbs renamed it She Shoulda Said "No!" and re-released it with some success. (It was also known as Devil Weed.) It popped up occasionally on late night television during the 1960s, and made a brief return to theaters during the 1970s midnight movie craze. It was now called, The True Confessions of Lila Leeds, and played on double bills with films of the same ilk. By then, Leeds had turned to religion. While moviegoers were snickering at her old pot movie, Leeds was volunteering at local missions, and helping raise money for the Shriners.  She kept her distance from the movie business, and died without fanfare in 1999.

Why did Mitchum go on to success but not Leeds? For one thing, he was already a star.  Also, the war years had relaxed the public's attitude about certain things. A man could be forgiven for smoking marijuana in 1949. Unfortunately for Leeds, women were still held to different standards.

As for Leeds' contribution to movie history, Wild Weed  is actually a better  production than most drug films of the time. Even though it was shot in a mere six days by director Richard Kay, it looks professional and could almost pass for a low grade film noir. It also has the distinction, unique in exploitation annals, of featuring an actress who'd just been arrested on marijuana charges playing a character in the same situation.


Leeds' acting isn't bad, either. Had her life gone differently, I think she could have had a career in B-movies. Regarding her own thoughts on Wild Weed, she put it succinctly in 1952 for an article in Colliers magazine. "I took it. I was broke."