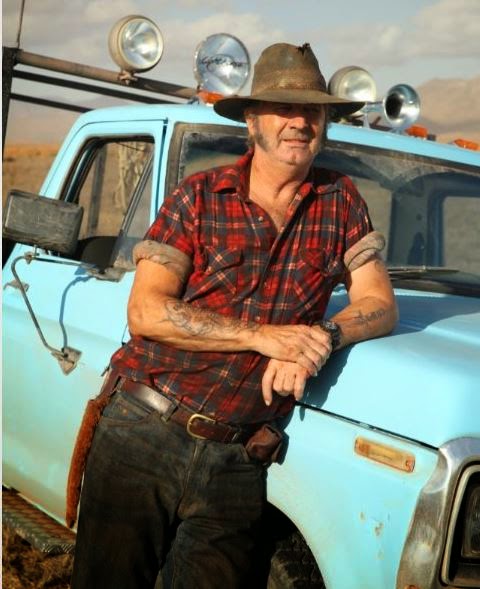 I barely remember Wolf Creek. I remember there was a pig hunter with a big knife who killed some young travelers and kept their body parts in some kind of underground butcher shop.  I liked the idea that the killer was just a plain old mug with a thick Aussie accent, and that the movie was allegedly based on a true case, but Wolf Creek came out in the middle of a horror movie glut; it didn't stick in my memory. I do recall Wolf Creek  being   more mean-spirited than most movies, and making me wonder whatever became of other Aussie characters like Crocodile Dundee and Yahoo Serious.

Somehow, Wolf Creek 2 works better.  I walked out of Wolf Creek 2 feeling  as if I'd just spent a few hours running through the Australian outback and was slightly sun-stroked. I don't know if it will have any more of a lingering effect on me than its 2005 predecessor, but it worked.

Part of its success, and I'd usually knock a movie for this, is that it gallops all over the place in terms of style and tone. The opening scene shows Mick Taylor, the bigoted Australian farmer who murders tourists for fun, pulled aside by police for speeding. He gets revenge on the belligerent cops, as we knew he would, by blowing off the head of one, and setting the other on fire. The scene has the comical feeling of an old Troma movie here, as if we're supposed to root for good ol' Mick and his ultraviolent ways.  The cops were bullies, see, and it was fun to see Mick light them up. Yet, within a few minutes, he's torturing some unfortunate German tourist in a scene that is less like The Toxic Avenger, and more like the most horrific scenes in Last House on the Left, or Texas Chainsaw Massacre (the originals, of course.) Later, as Mick disembowels one of his victims, he listens to Patsy Cline singing 'I Fall to Pieces,' and jokes with the corpse. Suddenly, we're getting gallows humor. I half-expected the old Crypt Keeper to pop out at any minute.

The film's climactic set piece involves a British tourist Mick has captured and taken to his underground lair/torture chamber. Tied to a chair and knowing his death is near, the Brit stalls for time by engaging Mick with some dirty lymerics and Aussie singalongs. As if a switch has gone off in his head, Mick can't help but join in on "Tie My Kangaroo Down, Sport." The scene is nerve-wracking, for we can't tell if the Brit has found a way to survive, or if Mick is just messing around. Mick, softened momentarily by the singalong, decides the Brit deserves a chance to save himself.  Mick offers him 10 questions about Australian history. If the Brit gets five of the 10, he's free to go. But Mick has a big selection of angry looking power tools nearby, just to keep things interesting.

These graphic scenes wouldn't be enough on their own. What elevates the movie are the constant visual surprises pulled by director Greg McLean and cinematographer Toby Oliver. In their hands, the expansive Australian outback is almost like a lunar landscape, wide and menacing. The vastness of the place and its emptiness is a frightening experience in itself, even if you're not being hunted by a madman. I was also impressed by the moviemakers' use of sunlight, especially when Mick steals a horse and rides after the runaway Brit, his dark silhouette looking almost iconic against the burnt orange sky. It's a beautiful moment, not the sort of thing we're used to seeing in modern horror movies.


McLean, who co-wrote the script with Aaron Sterns, also gets into something I'll call the "horror of indifference," a queasy sense that no one gives a damn about you. The movie's key motif is for Mick's victims to try to escape by hitching a ride with someone. Sadly, the occasional car or truck that speeds by doesn't even notice them. And when Mick is sticking his knife into somebody, the vastness of the countryside seems to make things more hopeless; in the outback, no one can hear you scream.

This bleak world view, in which the planet is a big, lonely place and we're just small critters waiting to be destroyed by unfriendly forces, is unsettling. I don't know what it says about the Australian national character - is there really such bitterness and anger? "Someone has to keep Australia beautiful," Mick says at one point, as if he's doing his country a favor by dismembering tourists. We never learn too much about Mick, which is probably what keeps him intriguing. He's a loner, and as in the first movie, we see him alone at the end, walking through the outback, as isolated as John Wayne at the end of The Searchers. Even a dumb scene where Mick's truck squashes a herd of kangaroos can't dissuade me from thinking McLean has something different in mind than just garden variety blood and guts. This is horror by way of John Ford, shot big, with big feelings at stake.

McLean's movie isn't for everyone. Even fans of horror movies are divided. Some wonder why Mick is never punished. Some seem irked that McLean casually breaks the conservative rules of horror, and doesn't bother with some insipid movie hero to put Mick in his place and restore order. But part of the movie's strength is that Mick is like a force of nature, as much a part of his environment as the kangaroos and the cracked soil. How, exactly, are you supposed to punish a force of nature? You can't.

I'm glad the movie wasn't American. An American director would've turned it into a found footage mess, and the recent crop of young American actors are so shrill and effete that horror movies suffer from their inclusion. I like that the first tourist couple we see are German. They're very sweet together, and it's sad to see them fall into Mick's clutches. An American couple would have been bickering the whole time, texting their friends, being obnoxious, because that's how Americans think they're supposed to behave in movies. I like how Rutger, the German fellow, loses his temper when a truck almost hits him and his girlfriend on the highway. Rather than grouse about how he loses his temper too easily, as an American actress might, the German girl merely takes his hand and calms him down. Even from a distance, their closeness feels real, in a way that few young American actors could capture.

I also like John Jarratt as the relentless and remorseless Mick. I don't know if he's a satirical character or not, or if he's supposed to represent some proverbial chip on the Australian shoulder, but he's one hell of a movie villain. He's enough to make me forget Yahoo Serious.